When a flake of snow hits UK soil – the whole island is put on hiatus. So it was pretty befitting that I’d catch up on my AFI challenge and watch a classic movie this weekend (as the inch of snow forced me to stay in),  plus I haven’t posted on here for a year and a half – so it’s about time I attempt at doing this bloody list again.

As it was Oscars weekend I thought I’d check out ‘The Graduate’ (1967: ‘98 #7, ‘03 #17).  One of the most iconic coming of age movies that was the last to win only for Best Director at the Academy awards (bit of trivia for you). And when I say this film is iconic, I mean it in every sense of the word. Even though I never had seen it before this weekend – I pretty much knew the whole plot, some of the key quotes and the soundtrack, which is why it is ranked so highly in on the 1998 and 2007 lists. But other than having a huge cultural impact, does the film have the credentials to be ranked so highly with ‘Citizen Kane’ (1941) and ‘Schindler’s List’ (1993)?

The storyline is pretty straight forward; a talented graduate (Dustin Hoffman) from a middle class family, but with no sense of direction, begins an affair with an older family friend (Anne Bancroft) only to fall in love with her daughter (Katharine Ross). A tame plot by today’s standards, but Bancroft’s nude scene raised a few eyebrows at the time and age difference of 20 years between her and Hoffman’s character made the movie pretty controversial at the time. People probably wouldn’t have battered an eye lid if the male character was 20 years senior than the female. No one seemed to care when Grant was wooing a much younger Hepburn in ‘Charade’ (1963) and despite a twenty-five year age gap, Bacall and Bogart’s romance celebrated romance on and off the screen. Hypocrisy is today still prevalent as Best Picture nominee ‘Call me By Your Name’ (2017) has been criticised (by mostly straight white males, including James Wood) for the age gap of just a six years between the two gay characters. But star of the Academy Award winning film Armie Hammer brilliantly highlighted our double standard society by kindly reminding Woods that he dated a 19 year old when he was 60.

But back to ‘The Graduate’; yes, it was a risky plot at the time and yes, it perhaps invented the coming of age genre. But Hoffman’s character comes across as such a self-absorbed selfish brat who doesn’t seem to have the slightest concern his actions are destroying a family – that he is hard to like. That being said Hoffman plays the part brilliantly and his awkwardness brings in subtle comedy to the movie. He even at times, when not being an arrogant punk, displays endearing and charming qualities of the arguably the greatest literary character of the twentieth-century; Holden Caulfield from ‘Catcher in the Rye’ (1951). In fact I’m almost certain that Benjamin Braddock was inspired by the protagonist in J.D Salinger’s masterpiece.

It’s hard to think of anyone other than super seductive Anne Bancroft playing the role of Mrs. Robinson. Her iconic husky and commanding voice brought some of the most memorable one liners to modern cinema, it’s crazy that the role could have gone to Joan Crawford or ‘Murder She Wrote’ star Angela Lansbury. At times Mrs. Robinson can be a bit annoying and her nonchalant attitude at the beginning of the movie makes it hard for you to have empathy for her. But toward the end of the film, you definitely see her more as a victim and can sympathise with her for having a loveless marriage.

The unforgettable ending, which has probably been recreated by every soap in the last fifty-years (as well as famous Renault Clio advert from the 90s) alone qualifies the classic to be in AFI top 100 films of all time, but it is suited to its 2007 ranking of #17 rather than top ten position in the 1998 list.

For its superb cast, iconic quotes, invention of the coming of age genre and soundtrack that sets the mood for the movie – I give ‘The Graduate’ 4 out of 5.

Four long years before George Lucas became a household name with every sci-fi and fantasy fan across the world, he was known for directing ‘American Graffiti’ (1973: AFI 1998 77# 2007 #62) – a coming of age drama starring a very young (and very odd choice for leading man, probably because I only associate him with the uptight Dr Leo Marvin in ‘What about Bob’) Richard Dreyfuss and Ron Howard.

Although I have yet to see Lucas’s most accomplished movie ‘Star Wars’ (1977: 1998 #15, 2007 #13), it doesn’t take a Star Woidz (which is apparently the official name given to avid Star Wars fans) to work out that the two films couldn’t be more different. Firstly ‘American Graffiti’ is set in this galaxy and the characters are far more relatable than the iconic but distant and cold characters of the sci-fi classic.

To be honest I didn’t really know what to expect when I came across the movie on Netflix, in fact before scrolling through the American Film Institute of top 100 films of all time I had never heard of it let alone knew the legendary George Lucas directed it. So it was quite a surprise to learn the man I associated with family friendly viewing directed a film about cruising in the 1960’s – although I think the term has taken a more sleazy meaning in recent years. The story follows the antics of a group of four high school graduates on the night before an undecided Curt Henderson (Dreyfuss) leaves his friends and the small town to start college with best buddy Steve Bolander (Howard). Whilst Curt goes on a self-discovery journey during the film his mates hunt for girls by driving up and down the streets in their classic chevys, which seems to be the way adolescents got acquainted before Tinder took away the thrill and excitement of courting.

The movie which is inspired by Lucas’s experiences of growing up in post-World War Two America gives an interesting insight of how teenagers perceived the world before major incidents such as the JFK shooting and Vietnam War changed attitudes. I was particularly fascinated by the predatory way guys hunted for girls in a carefree and somewhat liberal era, which couldn’t be more different from the social media tools used for pulling the opposite sex that has become the norm in today’s society.

Iconic diner set in the movie

Perhaps it’s because I didn’t know what exactly to expect when I selected the play button on Netflix or maybe it’s because I watched the movie at twelve in morning without mentally preparing myself, (which is what I have to do with each movie I watch on the AFI top 100 countdown) but I felt my mind wonder throughout the movie and nearly nodded off a few times. Although the movie had some humorous moments mostly from Paul Le Mat and the teenybopper who is fascinated by him, the film at times felt like a long car journey that wouldn’t end soon enough and for that reason I give it a 2 out 5.

My friend Sunny who told me on the weekend that when he reads my blogs he is hoping to one day find a review on a film he’s actually watched – I guess he is expecting something like ‘Iron Man(2008)’ or ‘Training Day (2001)’ to be featured.

Perhaps in the twentieth anniversary there might be some representation of the modern comic, superhero, fantasy genre which seems to be lacking in the current list. But I can put my money on a film like ‘Superman (1978)’ being added long before ‘The Avengers’ (2012) is.  Not because it is necessarily better or more popular than the blockbuster starring Scarlett Johansson, but it did the genre first and is therefore arguably more culturally significant, which is a major criteria for the movies to be considered for the countdown.  Just as I explained why ‘Jaws’ (1975, AFI 1998: #46, 2007:#56) deserved its spot on the AFI top 100 list – It influenced countless of (mostly terrible) horror movies that followed suit or why ‘On the Waterfront (1954, 1998:#8, 2007:#19)’ is regarded so highly on the list. Not only because is it a terrific movie, but it has the timeless “I could have been somebody” line that everyone seems to know (but sadly more and more non classic movies lovers are forgetting where it originated from).

I’ve probably so far watched around sixty classic movies featured on the American Film Institute’s top 100 movies of all time lists and so I’ve agreed that most films earned a place on the prestigious countdown.  But there are some movies that I just don’t understand how they made the cut.

For example I don’t see what the big deal is about ‘East Rider (1969, 1998:#88, 2007:#84)’, a coming of age movie about two bikers who travel through the South. It stars Dennis Hopper and Peter Fonda who with the money they made through drug smuggling go on an adventure across America where they meet some characters along the way. One of them is pre-frame and very young Jack Nicholson who even though is my favourite modern movie star and plays the role of a drunken Lawyer very convincingly, doesn’t regain my interest in the movie. Although the feature gives a good insight to life in late sixties America the plot is really thin and at times I had to rewind the film because I was getting distracted. The ending is the biggest shock of the film and comes totally unexpected and is definitely the highlight of the film.

I guess the movie was very unique and taboo busting at the time because it dealt with the hippie movement, recreational use of drugs and promiscuity – all pretty tame by modern standards and done better by Midnight Cowboy (1969, 1998;#36, 2007: #43). I give the movie 2 out of 5 and that’s mostly for the killer soundtrack! 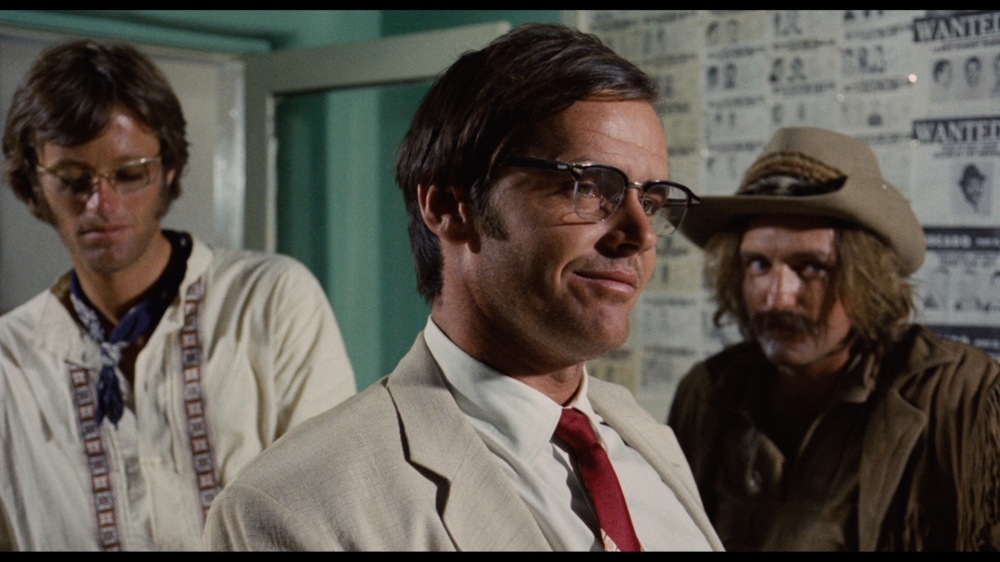