I’ve been pretty troubled with some of the news I’ve been reading from across the pond – it seems like attitudes to race hasn’t changed much in some areas of States since the Civil Rights Movement. Despite there being a black President it appears that deep rooted prejudice is more prevalent than ever and with the rise of citizen journalism on social media sites like Twitter and Facebook people in authoritative positions have been exposed for abusing their power.

Depressingly Hollywood has a history of excluding black actors in their movies or casting them in roles which were stereotypical. There was a huge uproar when Hattie McDaniel, who played a maid in ‘Gone with the Wind’, was forbidden from attending the première of her own movie in 1939. Although she was able to collect her Best Supporting Actress accolade at the Academy Awards (the first ever won by a black actor) she was unable to sit with the cast at the front and was placed at the back of the theatre on her own with an escort. You’d think racism would have been completely erased from modern day American cinema, but leaked racist emails of top Hollywood producers mocking Obama earlier in the year revealed the problem still exists.

Hattie McDaniel accepts her Oscar in 1940

So it’s not surprising that the 1998 and 2007 list of the American Film Institute’s top 100 films of all time only has one ‘black’ film – ‘Do the right thing’ (1989: AFI 2007, #96), directed and starring Spike Lee. The movie set in a black neighbourhood in Brooklyn centres around Mookie who works as a Pizza delivery man for an Italian-American family. Although he gets along with the owner, his son Pino dislikes blacks and often clashes with Mookie. Racial tension between the Italians and African Americans in the neighbourhood steadily rise over the course of the film until it reaches boiling point. This is when the audience ask themselves ‘Did Mookie do the right thing?’ I don’t want to give away the plot too much, so will not say exactly what he did, but what makes the film so unique is that it is extremely difficult to answer and it has people questioning whether or not they hold the same prejudices depicted by some of the characters in the film. 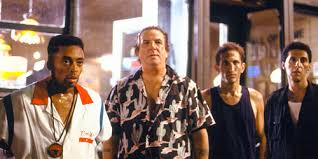 I’m guilty of initially having the opinion of most non-blacks by believing the main character was wrong for his actions, but in an recent interview Lee stated that he had not come across one black person who thought the protagonist was wrong and they all believe that Mookie was  justified for his actions because he reached boiling point. What people also fail to realise is his actions in the penultimate scene of the movie indirectly prevented more serious casualties – nothing in more precious than a life. How could I have missed that?

The movie rightly deserves its place in the list; it terrifically depicts urban life in New York in the late 80’s. The stylish freestyle dance sequence done by a then unknown Rosie Perez in the opening credits highlights that Spike Lee not only hoped to create a movie that was socially conscious but wanted to showcase all the positive things black culture has brought into the mainstream. Although this movie is blueprint for films that explored similar themes in the 1990s, I feel that ‘Boyz in the Hood’ (1991) and ‘Menace II Society’ (1993) were more gripping and for this reason I give this movie a 3 out of 5.