I was lucky enough to hear that The Prince Theatre in Leicester Square was showing ‘Blade Runner’ (#97 on 2007 AFI top 100 list) this weekend so like a sci-fi movie buff I pre ordered tickets to ensure I was able to watch what is hailed as Ridley Scott’s best work (yes, even better than Alien apparently) on the big screen. Obviously I don’t qualify as much of a sci-fi enthusiast to go alone so I dragged my friend Cam who is also attempting to complete the list of the AFI’s top 100 movies of all time, but lacks the focus to get through it because unlike me she probably has more productive things to do with her time.

It felt like we were in a 1982 time warp when I and Cam spotted the original movie poster outside the cinema – the time-travelling didn’t stop there: When we got into the retro theatre we sat on chairs that were made from the tough brown leather that look liked it was as old as the building, but still durable after all those years of wear and tear and the screen was covered by traditional thick red velvet curtains – the perfect setting for a classic movie. We had our popcorn, coke and seats and were ready to see the awesomeness that is ‘Blade Runner’. As the lights went down and the curtains drew back I looked over to Cam and said ‘Do you have any idea what this is about’ she looks back to me, smiled and replied ‘No’.

Sometimes it’s a good idea to go into the movie blind – it can avoid the disappointment of having high expectations that I have suffered a few times when going through the list. Cam’s friend gave her some good advice before she saw the movie with me which was; ‘You’ve seen it all before, but remember this film did it first – which is why it is considered so great!’ That pretty much applies to most of the films that made the AFI 100 movies cut.

I must admit I’m not much of a sci-fi man, I haven’t managed to see the original ‘Star Wars’ (#16 1998, #13 2007) yet, but the plot of ‘Blade Runner’ was pretty familiar: The film is set in Los Angeles 2019 which I guess seemed like a long way away in 1982 – where Rick Deckard played by Harrison Ford must track down and kill four evil genetically engineered Replicants who look like humans but possess superior strength. Obviously he falls in love with an additional one on the way played by icy Sean Young and things get complicated when he must decide whether to save or retire her. 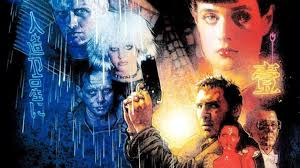 What sets this movie apart from the rest is the noir feel it has – ‘Blade Runner’ is very stylised and at times feels like a crime thriller rather than a straight forward science fiction film. I can see that films like ‘Watchman’ (2009), ‘Sin City’ (2005) and even ‘Kill Bill’ (2003) have been heavily influenced by Scott’s innovative piece. The special effects seem ahead of it time and are particularly impressive for an early 80s film although they anticipated evil robot like creatures and flying cars in the noughties, but they couldn’t have imagined a flatter TV screen or colour computer?

Ford who along with Bruce Willis is the epitome of an 80s action star is perfect as the reluctant hero and Sean Young who reminds me so much of Katy Perry in this plays the stiff and disconnected Rachael well – although I will forever associate her as the transsexual dolphin stealing ex-football player in ‘Ace Ventura’ (1994). Perhaps the big surprise for me was Daryl Hannah who I had no idea was in the movie – she is magnificent and terrifying as Pris and probably inspired Quentin Tarantino to cast her in his ‘Kill Bill’ masterpiece.

My only issue with the movie is that at times the plot can be too thin – the protagonist seems to conveniently track down the enemy without much of a struggle and the dialogue is not as gripping or as slick as the cinematography and for that reason I’d give it a 3 out 5. Perhaps like Cam I need to see it again to fully see what I missed the first time round or I might view the Blade Runner Sequel instead which seems to be forever in the works.